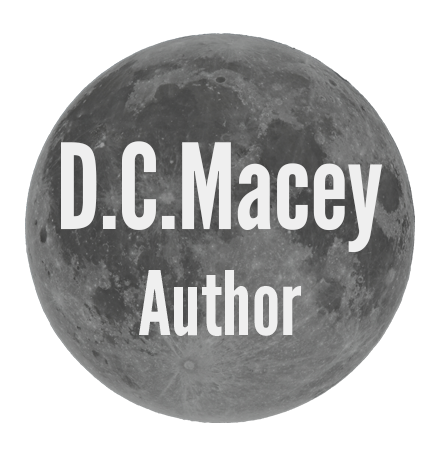 The Temple Legacy – making #1 in its Amazon.com categories 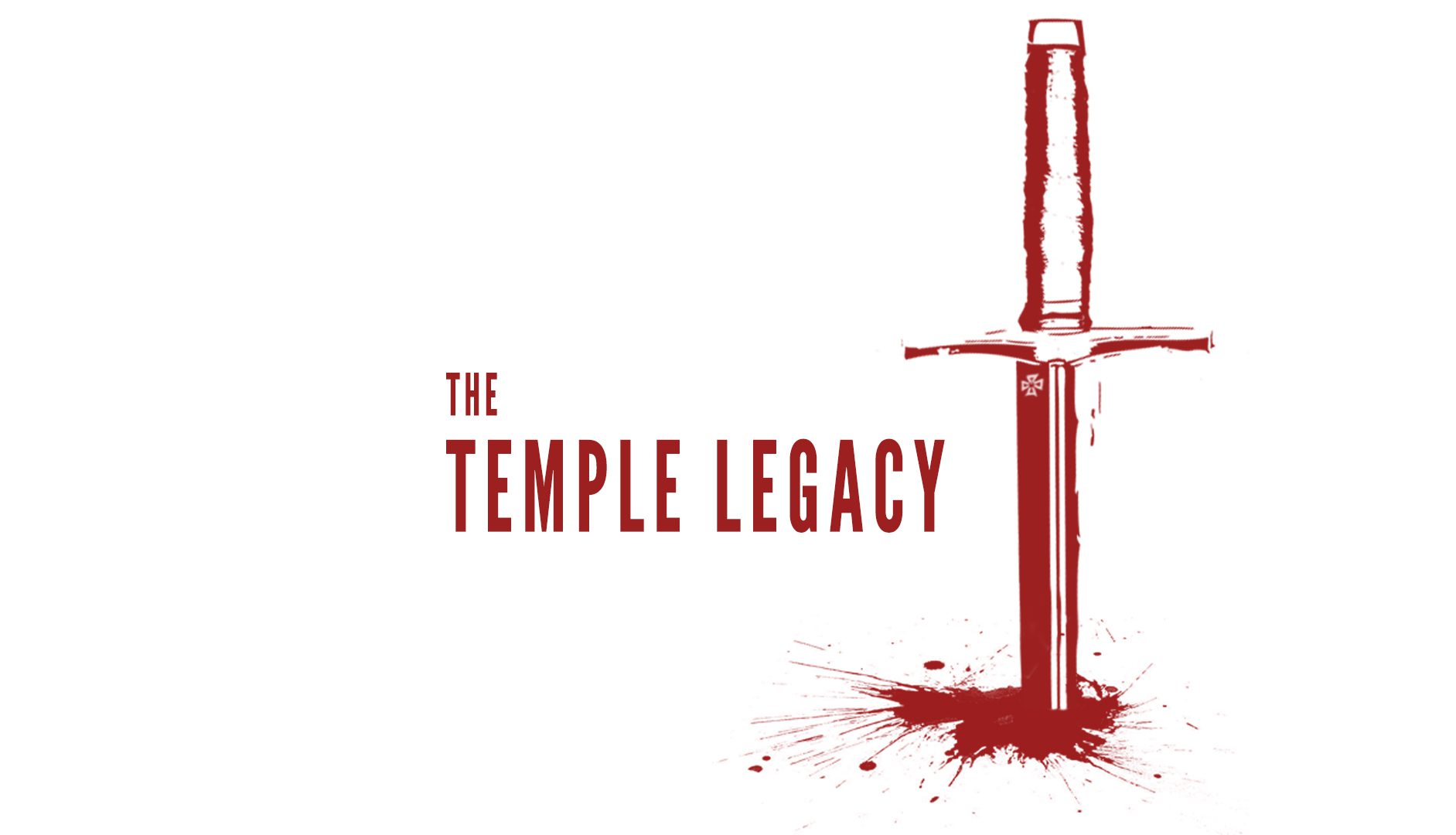 One of the biggest problems faced by independent authors is achieving visibility in a very busy international marketplace. It’s tough, though I have been happy with the progress made during the past couple of years. Even so, following publication of The Temple Deliverance, the fourth book in the series, I decided to try a little extra promotional push at the start of the summer.

The goal was to raise awareness of my work amongst more readers in both the UK and USA. The particular focus was on the first book in the series, The Temple Legacy, using the BookBub advertising platform for the main thrust of a discount promotion campaign.

The results surpassed my highest hopes. I am really delighted with the outcome. The Temple Legacy made number one in two separate categories at Amazon.com during the promotion.

The Temple Legacy’s achievement as badged on Amazon.com:

This post is written in large part to express my gratitude to all those readers who previously chanced upon my writing and were prepared to invest their time in reading the novels. Thank you, your early commitment provided the encouragement that supported my writing of the full series.

Thank you too, to all those many, many readers who chose to engage with my recent publicity drive; you propelled The Temple Legacy to number one in its categories at Amazon.com, the world’s biggest online bookstore – brilliant. 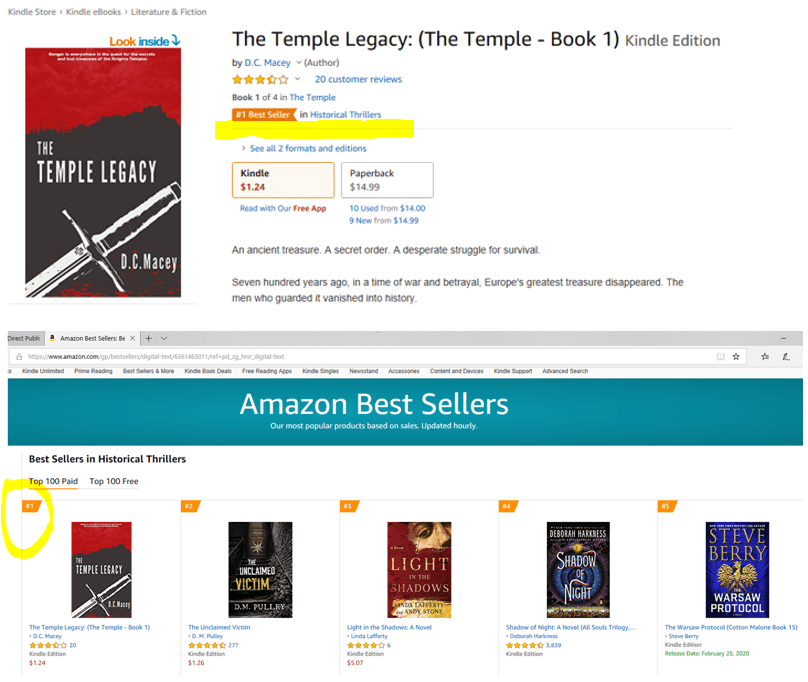 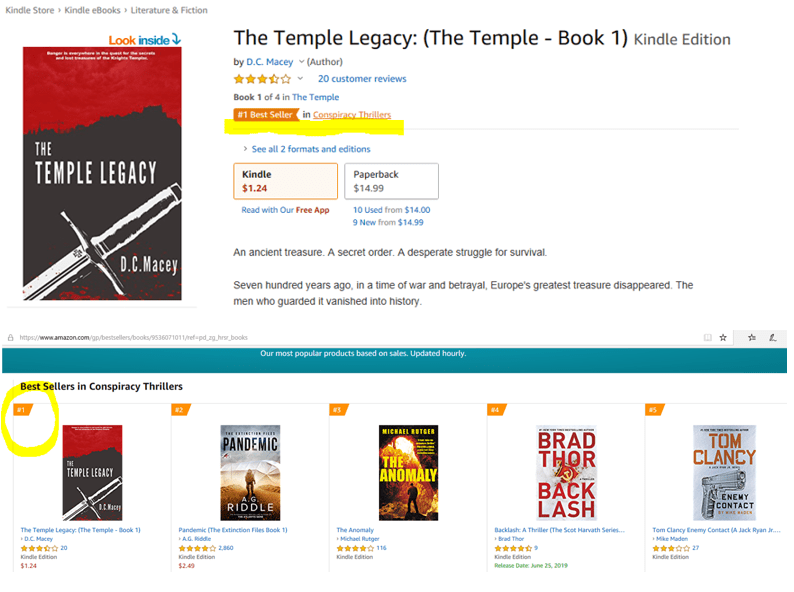 Still savouring the pleasure of seeing The Temple Legacy hit number one spot in its Amazon.com bookshop categories, I chanced upon another Amazon.com nugget that truly delighted me. This is something that might not happen too often – perhaps only with the frequency of lightning striking twice. So I was pleased to snatch the freeze frame shown below.

On one day only, in Amazon.com’s Most Popular Author Rank – Action & Adventure Category, D.C. Macey and the Temple Series were placed at 25, ranked above George R.R. Martin with his Game of Thrones series at 26! 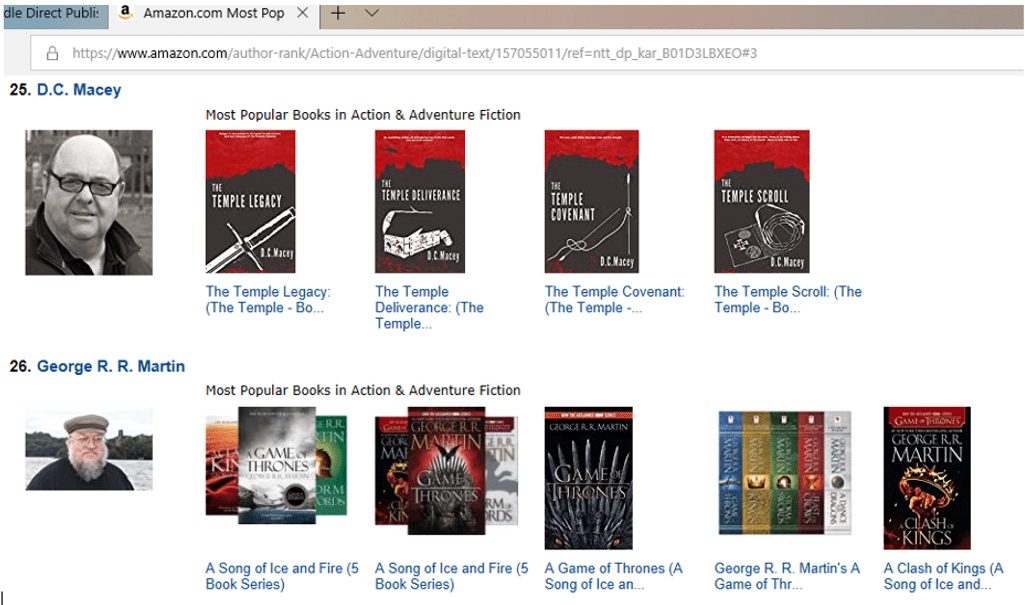 I have been absolutely thrilled at the response to my marketing and publicity push of late June/early July and intend to undertake some further promotional activities soon. In the meantime, I’m very much aware there is more writing to be done. I hope my next work will prove of interest to readers too – more on that later.

Once again, a sincere thank you to all readers, old and new.

With my very best wishes. D.C.